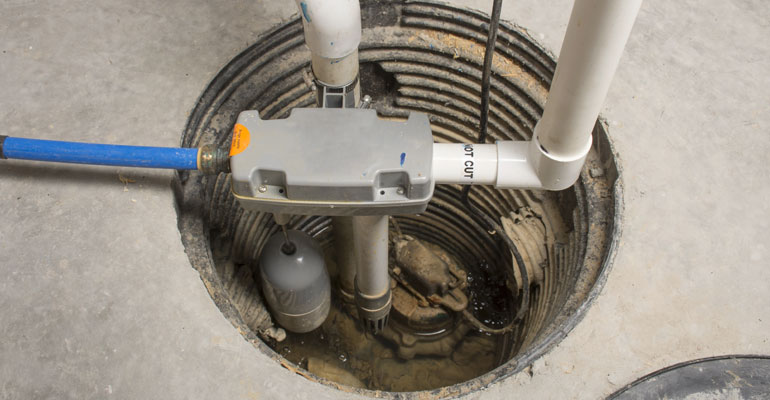 In the fight against potential floods, a sump pump will be one of your greatest allies. Basement flooding is commonly caused by water in the soil. A sump pump removes water from the lowest point in the basement before it enters the basement floor, and pumps it outside the property’s foundation.

Flooding is a threat to property, as well as to your plumbing system. Sump pumps can protect the structural integrity and value of your home, as well as your personal belongings in the home.

Checking a sump pump involves removing the cover and pouring water into the tank. In a normal operation cycle, the float rises, which will start the pump, and the water level will fall until the float goes down and shuts off the pump. Listen for strange noises, watch for the water to discharge outside, and don’t forget to change the battery in your back-up sump pump every couple of years. Watch for an oily film on the surface of the water in your sump pump, as it may indicate the need for a new oil seal.

The most common problem with a sump pump relates to the float. Sometimes it gets caught and needs to be straightened, or sometimes it needs to be replaced. This is the case if the water goes down and the pump does not shut off. A back-up sump is an important thing to have.

Cleaning your sump pump is best left to professionals, but you can take care of buildup in the system by running vinegar through it. You can test the pump yourself, which is recommended every two to three months, or after a heavy rainfall. An annual cleaning before the rainy season will help your sump pump remain in good working order.

A sump pump failure can be caused by a power outage. A manually-activated backup generator can help with this problem, but does not guarantee to prevent it. The wrong size of pump, a poorly-installed pump, or a bad switch can also cause pump failure.

A backup sump pump is a good thing to have if your system floods during the winter, or if you live in areas where storms cause power outages. A sump pump with a different power source will protect you during these times when the power is out. One type of backup pump operates with a rechargeable 12-volt battery. The other type is powered by water pressure.

If your electric sump pump has failed, there are numerous causes to explore. The pump may be clogged, unplugged, or broken. Or, the fuse could be blown, a power feed line could be damaged, or a circuit breaker could have been tripped. A failing sump pump can result in significant damage. Worse, the damage may not be covered by insurance.

If you choose to buy a generator, it is important that it can power a sump pump. A small pump needs 800 to 1000 watts with a surge to 1,200 to 1,800 watts. All generators have a maximum and rated output. The maximum output should never be sustained for more than 25 to 30 minutes at a time. Most generators are gasoline-powered, a few run on diesel, and some models have multi-fuel capabilities – running on gasoline, propane, or natural gas.

When your sump pump has reached the end of its lifespan and you need to select a new one, it is important to know be an informed consumer.

The two main types of sump pumps are the pedestal sump pump, and submersible sump pump. A pedestal-type pump has the motor at the top of a shaft where it will not be in the water. Submersible pumps sit below the water level.

Sump pumps usually come with an automatic on/off switch, most commonly a float switch that is triggered by rising water. The size of your pump is dependent upon the amount of water you expect to need to pump, how far up the water will be pumped, and the length and size of the pipe. Staff from Plumbing and Heating by Craig can help guide consumers to ensure that they get the right size for their needs.

A good pump that is properly sized and maintained can last three to 10 years, according to the U.S. Department of Housing and Development. When buying, look for one that is built and tested according to Sump and Sewage Pump Manufacturers Association (SSPMA) specifications.